Silicon Valley Entrepreneurs, the world’s largest mobile entrepreneur community held it’s monthly meetup- Pitch Demo Day on September 21st, which achieved great success.  A number of  startups were chosen to pitch in front of the judge panel and hundreds of audiences, they were all stellar.  Finally, Oculii was announced as winner by the judge panel, MedLuma and PREO are runners. 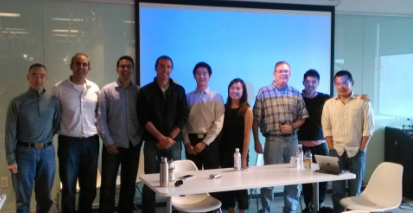 Steven is one of the co-founders and current Director of Product @ Kumu Networks, an NEA/KV backed startup commercializing 5G full duplex wireless technology. The technology was developed while Steven was a graduate student at Stanford University, where he completed his PhD in Electrical Engineering. Prior to his time at Stanford, Steven spent time as a consultant at McKinsey and Company and a research engineer at the Air Force Research Laboratory, where he worked in the Sensors Directorate of the Air Force Material Command. You can reach him with questions or comments at steven@oculii.com.

“Thanks to David and all of the judges and organizers for putting on a great event! ”

“The amazon.com of healthcare services, helping patients shop for healthcare providers, and providers effectively market their services to potential patients.”

MedLuma is a start-up dedicated to helping patients become better consumers of healthcare services, and helping healthcare providers find patients. We at MedLuma believe that the healthcare market can be improved through information services that help patients and providers find each other more effectively. To that end we are embarking on a journey to collect and disseminate data and tools to make patients more informed and active consumers, and build a marketplace where healthcare providers can promote their services. We are a nation of over 300 million patients, and over 100,000 healthcare providers. The possibilities are endless.

Harish has over 10 years experience spanning enterprise software development, product management and product marketing across multiple industries.  In his words, he has ‘designed it, built it, priced it, packaged it, shipped it and sold it’.  At MedLuma, he is responsible for product strategy, product marketing, technical architecture and implementation.

Message from founders
Healthcare today is closed.  Patients are in the dark about prices and quality, and providers are unable to find and retain their ‘ideal patients’.  MedLuma wants to open up healthcare by connecting patients and providers on their own terms.  Join us as we bring the consumer revolution to healthcare.

Preo is a free app that lets users order and pay for food and drinks, then get a notification when their orders are ready for pickup at the bar, or for delivery to their table. Our innovation lies in our ability to integrate seamlessly into the workflow of waitstaff. We use a patent pending receipt printer that can automatically detect when waitstaff are working on orders, and can automatically notify users.
Founder’s Profile: Richard Liang

Richard was a bartender before his career as a private equity investor. As a New York native, he’s all too familiar with the woes of service in high traffic venues. His responsibilities include product development, business development, operations, and everything in between. He’s also highly active in the startup community serving as former President of the Columbia Entrepreneur’s Organization, an InSITE fellow, and the Director of Technology at the Columbia Business Lab. He started his first company during high school, and financed his college tuition with the proceeds. He’s also an avid swimmer and wrestler – usually competing in a higher weight class.

Tagged as: Pitch and Demo