Digital Health Investment in China Tops $1.1B in First Half of 2016 – CBInsights

CBInsights: The 10 largest deals in China digital health since the start of 2015 have raked in over $1.5B.

From mobile fitness platforms to patient-doctor communication apps to online portals for selling pharma products, there has been a boom in investment to Chinese digital health companies in the first half of 2016.

In total, over $1.1B has been deployed across 21 deals to Chinese digital health companies in the first six months of the year. It’s worth noting, though, that three investments each totaled over $100M in financing over the period including Ping An Insurance-backed medical services app Ping An Good Doctor, Beijing-based mobile healthcare app maker Spring Rain Software, and health data mining startup iCarbonX.

The chart below highlights how mega-rounds have propelled China’s digital health investment since 2012. Deal activity in the first half of 2016 was nearly equivalent with that of all of 2015. 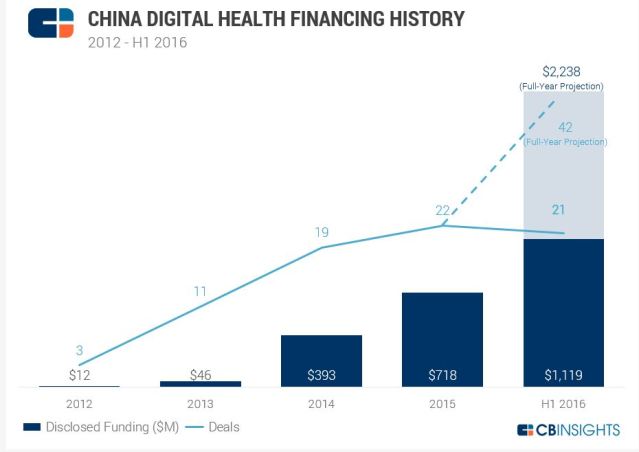 Full article: : Digital Health Investment in China Tops $1.1B in First Half of 2016